Too many obstacles for the blind: “A few acoustic traffic lights has been installed but the streets are still unsafe”

The president of the Rittmeyer Institute, Hubert Perfler:

public offices, the queue ticket dispensers do not emit any sound,

so it’s impossible to use them” 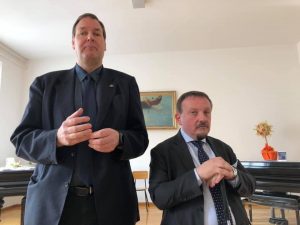 There are still few acoustic traffic lights, as well as the tactile-plantar pathways. Many intersections and pedestrian crossings are not safe and even walking down pedestrian streets is not always easy. Moreover, it is impossible for many to get around in public offices.

These are the problems that blind and visually impaired people face every day. There constant obstacles, in a city that they still deem inaccessible.

Something is getting better though. The Piazza Libertà works will lead to the activation of the new LETIsmart radio beacon system, with interactive controls for those who use the smart stick. However, most of the center city, as well as the outskirts, present many hindrances, often insurmountable. And these issues affect more than 2 thousand people in Trieste.

“We count 500 members, but actually, those who have issues with their sight are four times the amount – points out Hubert Perfler, president of the Rittmeyer Regional Institute for the blind and vice-president of the Italian Union for the Blind and Visually Impaired of Trieste – it is also proven that an over 65 out of three suffers from an eye disease. This is why the situation must get better in the city. A few decades ago many architectural barriers were demolished, but accessibility is still very scarce almost everywhere.” The consequence is that those who want to move around independently, without a carer, risk not being able to do it safely. “Traffic lights with acoustic signal are few, dangerous intersections or crossings are not always highlighted with the tactile-plantar flooring and there are also other types of signals missing, which are functional for those who walk. It would take only a nudge – he stresses out – to make improvements that would prove to be fundamental, because Trieste, a city with an Austrian architecture, has a linear map, with simple routes to travel on».

Perfler also highlights another tricky matter, reported by many people. “Many public offices are a tragedy,” he maintains, “because non-acoustic queue ticket dispenser have been installed, which are therefore often unusable.” And when it happens, those who have to get a document, book a service or simply make a request that demands waiting in a queue, must seek help from the staff present or be accompanied. «There is, again, still so much effort to put into work. For the time being, blind people are truly struggling to move around and often the solution is a bespoke course, developed at the Rittmeyer institute, which allows the blind to independently face at least the usual paths, for example from home to work and back, or to the shops he usually hangs out at.”

But everyone should be able to count on greater freedom, he carries on, thanks to the technology that is improving and providing interesting products, “just like LETIsmart”: “A person should therefore be able to cross the road alone, to understand when a bus is coming, getting on and getting out at the desired stop. Everywhere. They should be able to find the traffic light pole without any issues. Sticks are on the cutting-edge, but the city must continue to grow. We wish that other areas will be equipped with modern equipment such as Piazza Libertà, in a short time. But for the moment – concludes Perfler – there is still a long way to go».