NO XE DUE SENZA TRE (Good things come in trees) 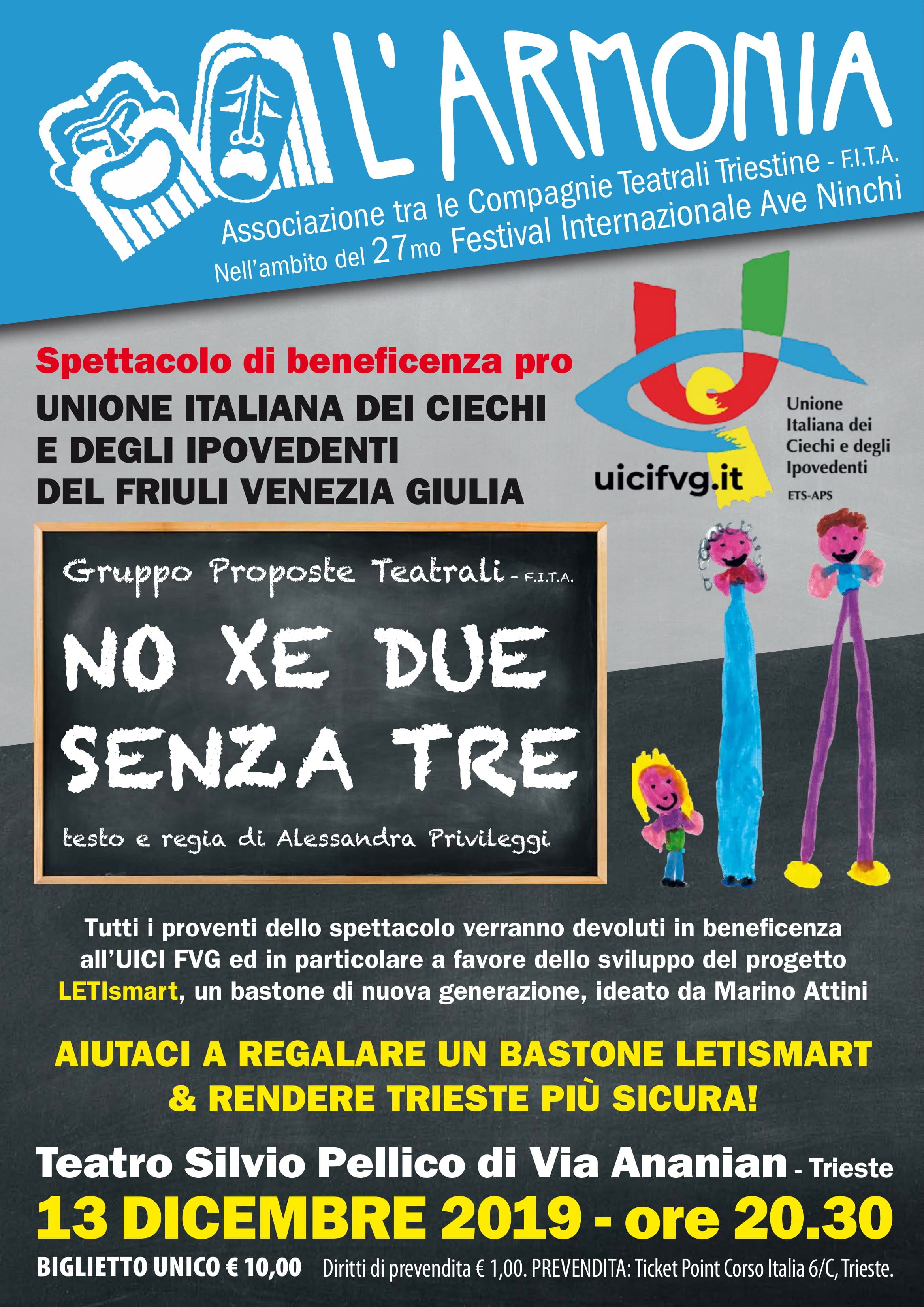 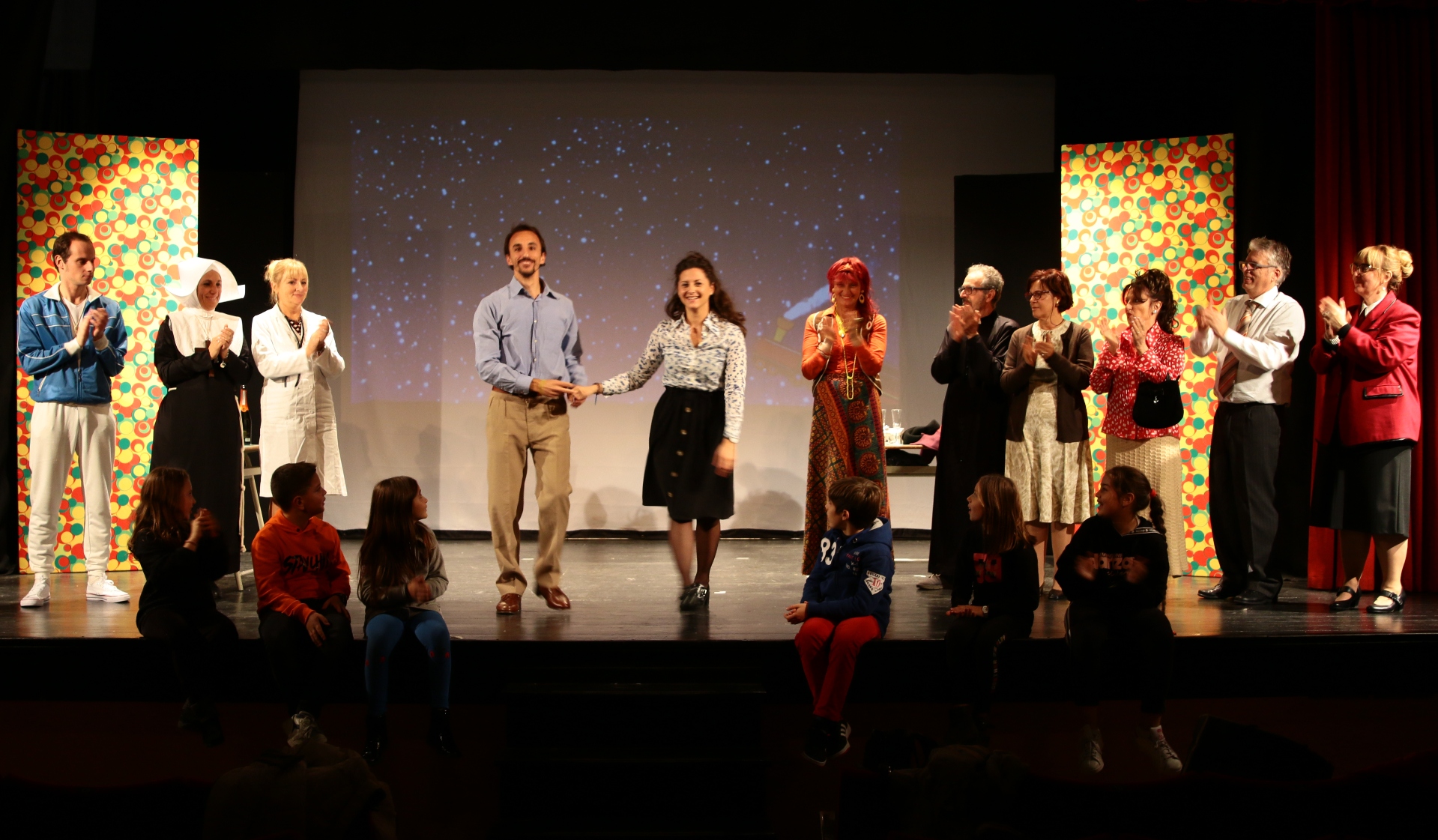 On December 13th will take place the comedy “No Xe Due Senza Tre” (Good things come in trees) at the Silvio Pellico Theater for charity for the Italian Union for the Blind and Visually Impaired of Griuli Venezia Giulia as part of the 27° Festival Internazionale AVE NINCHI – Teatro nei
Dialetti del Triveneto e dell’Istria.

The play, a comedy in the dialect of Trieste, written and directed by Alessandra Privileggi, will be presented by the drama association L’Armonia – Associazione tra le Compagnie Teatrali Triestine and performed by Gruppo Proposte Teatrali

All the proceeds from the show will be donated to the Italian Union for the Blind of Friuli Venezia Giulia and in particular for the development of the LETIsmart project, a smart stick, conceived by the president of the Trieste provincial section of the Italian Blind Union, Marino Attini.

The goal of the LETIsmart project is to improve personal autonomy and safety for the blind in an urban environment.

Right before the show, Marino Attini will briefly introduce his smart stick.

This gentle and amusing comedy intends to deal with a delicate, timeless, joyful theme, which can, however, become dramatic in some cases.

And who takes the responsibility of having children these days? In these kind of times? Has there ever been the right time?

And meanwhile years go by, seasons follow one another and life triumphs over cynical common sense…Good things come in trees…and the fourth will come on its own.

The awareness of the importance of personal autonomy and safety for the blind who moves around in an urban environment: this is the goal of the LETIsmart project. It consists of two elements which will shape up the ordinary white stick without however changing ergonomics, weight and any features of this precision tool.

The first solution, already on the market for a few months now, is called LETIsmart LUCE and is going to replace the part near the tip with one of equal size but capable of emitting a white throbbing light source whenever the blind person finds himself or herself in low visibility conditions, thanks to a sophisticated ambient light detection system which works in absolute autonomy and weighs less than 2 grams.

The second solution is called LETIsmart VOCE and is going to replace the handle of the stick with an almost identical one which contains a sophisticated system inside that keeps the blind informed on surroundings. This is possible thanks to a network of radio beacons specifically designed to be positioned, installed in the midst of the urban environment, on traffic lights, buses, in shops, public offices such as schools and universities and to provide simple indications regarding streets, squares or road works.

The creator, Mr. Marino Attini, graduated in Digital Electronics and since late 1970s devoted himself to research in the field of computer science and consumer electronics. Now in pension, he wanted to design this device with ethical purposes exclusively with the sole goal of improving the safety and the autonomy of people with severe visual impairment, based on the many experiences shared with members of the Italian Union for the Blind and Visually Impaired. Today, he is the president of its Trieste section.

SCEN, a company specialized in microelectronics with over six thousand projects to its credit on international level, has embraced the ethical value of this project and developed it with the most advanced technologies (www.scen.it).

The Italian Union for the Blind and IRIFOR, a national research institute connected to it, are today active partners in this important project. IRIFOR, specifically, has followed all stages of its creation, from a research and design point of view. IRIFOR brought its experience to the table and endorsed LETIsmart’s features and use.

The ANIOMAP, which draws together mobility and orientation instructors on a national level, was involved in the project during all field testing stages. Through its qualified instructors, it formed a team of about twenty blind people to test the device, with the purpose of drawing up reports on the practical use of the white stick featured with LETIsmart technology.